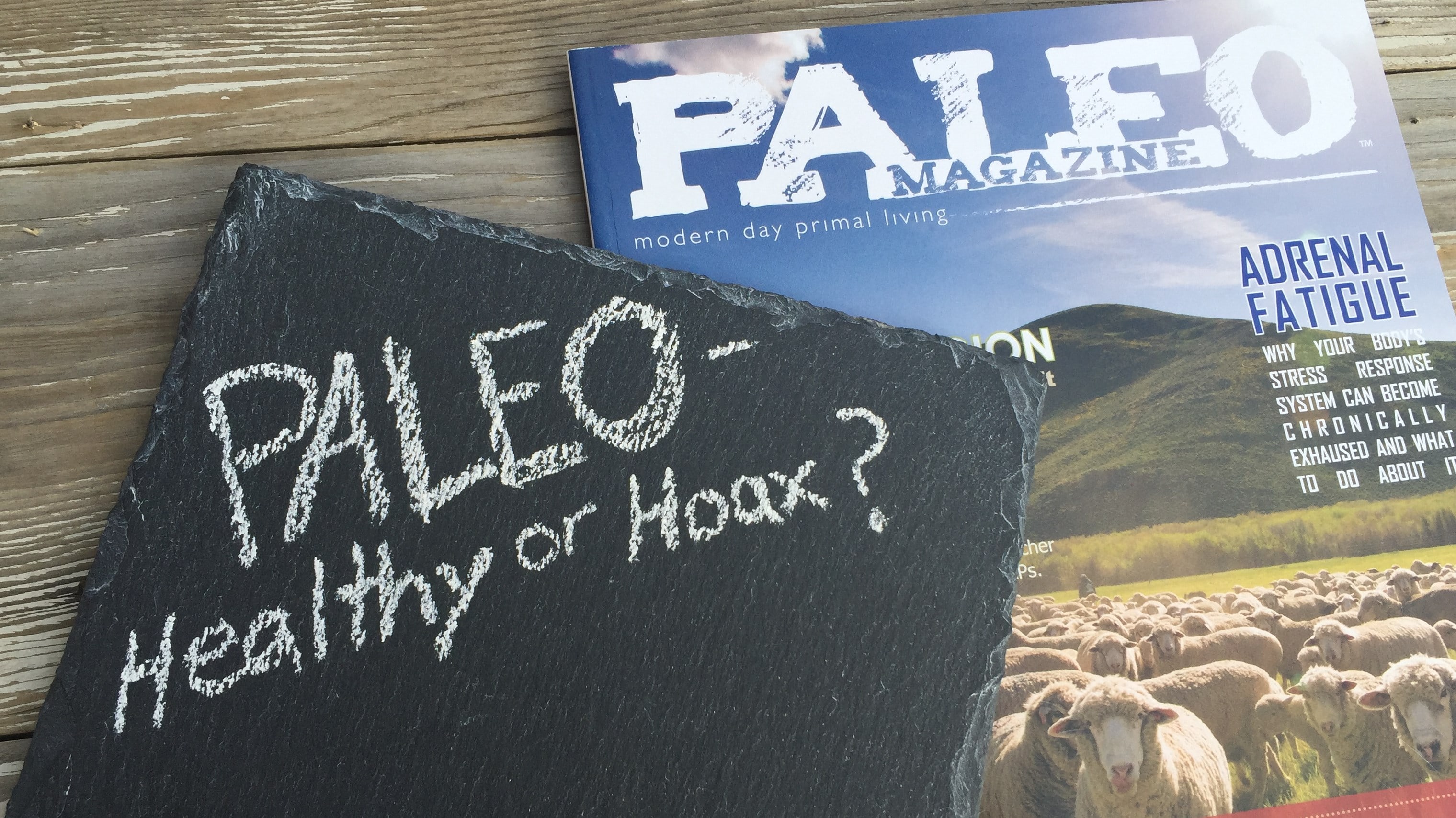 Is the Paleo Diet- healthy or hoax? It honestly blows my mind that there remains any question about the validity of a Paleo or ancestral diet, yet it seems that on a weekly basis I hear negative (and oftentimes downright ignorant) claims around this lifestyle. From “top health experts” calling the diet unmaintainable, to the dietician down the street deeming it nutritionally imbalanced; it seems that around every corner is another “expert” criticizing this lifestyle. Now, just recently US News and World Report established a panel of “experts” to examine the 32 most popular diets in 2014 and ranked Paleo as the worst. While I can usually laugh off the uneducated claims around the Paleo diet, this latest from US News really managed to get under my skin.

Before I jump up on my soapbox, here is some background on the US News and World Report guide- This report reviewed 32 diets of 2014 and gave each a scorecard based on 8 categories including: Overall Effectiveness, Long Term Weight Loss, Short Term Weight Loss, Ease to Follow, Nutrition, Safety, Diabetes and Heart Disease. The expert panel behind this report was composed of 22 health professionals; ranging from Registered Dieticians to Medical Doctors, Pediatricians, Cardiologists, Scientists and even a Psychologist. Some of the diets reviewed in this report include: Weight Watchers, Slim Fast, Jenny Craig, and even the Biggest Loser Diet; all of which were ranked higher than the Paleo Diet.

Ranked at the top of the charts was the DASH diet, which is designed to prevent and lower high blood pressure by reducing sodium intake and emphasizing foods such as fruits, veggies, whole grains, lean protein and low fat dairy while shunning “calorie and fat-laden sweets and red meat”. It would make sense that a diet rich in whole grains and low fat dairy would be popular among diet experts as most of these people’s education is likely based on the USDA guidelines which tend to focus more on the best interests of the United States Department of Agriculture and not the concerns of the average American. Also among the top 5 ranked diets is the Weight Watchers Diet, which claims that “there is a lot more to dieting than counting calories”, yet bases it’s entire premise on counting points which have been created on each food’s nutritional composition (fruits and vegetables carry zero points while higher fat/calorie foods are worth more points). So basically with Weight Watchers you can eat fruit all day long then choose to use your points towards chocolate cake or a Big Mac, and according to the experts behind this ridiculous report, you’ll still be better off than following an ancestral lifestyle. How can counting points on a daily basis be better than simply opting for balanced portions of the naturally low-sodium, high fiber, nutrient dense whole foods (found in a Paleo Diet) that our bodies were genetically designed to function on?

I suppose I shouldn’t be surprised by the information presented in this and the many other health articles, blogs and “expert opinions” floating around bashin

g a Paleo diet. The experts, journalists and healthcare practitioners calling this lifestyle unhealthy typically base their opinions on the completely corrupt educational and healthcare system that runs our country today. At what point will these experts stop following the pack of mindless sheep ahead of them and begin using common sense to think for themselves? Having studied Nutritional Science in undergrad, I received a similar education as the other healthcare professionals out there today however I’ve personally witnessed the USDA dietary guidelines fail my patients too many times to believe that grains, dairy and legumes are the answer to optimal wellness. As for paleo- I know this lifestyle works because I’ve seen it in action. I’ve witnessed firsthand how this lifestyle can decrease inflammation, reduce symptoms of autoimmune disorders, improves blood sugar and blood pressure, promote healthy (sustainable) weight loss, and drastically improves chronic gastrointestinal conditions and symptoms in countless patients. This sure doesn’t sound like a hoax or placebo effect to me.

Possibly one of the most common myths around a Paleo diet (which was mentioned in the report discussed above) is the idea that this lifestyle can create nutritional deficiencies as a result of the lack of grains and dairy in the plan. I’m not sure about anyone else but I’ve never heard of a gluten deficiency.The only reason that the vast majority of grain products in our food system today have any nutritional worth at all is because they were so void after being manipulated by modern man that we actually had to add these vitamins and nutrients back in to our cereals, breads and other snack foods to help balance out the nutritional deficiencies that we had developed as a result of eating so many of these worthless “staples”. For those worried about not getting enough B Vitamins and Iron without that daily bowl of vitamin enriched cereal, a balanced Paleo diet with plenty of fish and seafood, organic grass fed meats, green leafy vegetables and organic eggs is sure to fill in any nutritional gaps, while creating less of an inflammatory burden. As for the dairy debate; sure dairy contains calcium and potassium, however so do vegetables, fruits and fish. Yes, it may be more appealing to obtain that daily dose of calcium in the form of hormone-infused milk and sugar loaded yogurt; the truth of the matter is that we can get all of the bioavailable forms of calcium we need from fresh greens, sesame seeds, sardines, salmon, almonds and broccoli. Combine that with some vitamin D-rich sunshine and weight bearing exercises and voila- Strong bones!

As for the concerns around the amount of meat and fat consumed on a Paleo diet; again it’s time to use common sense and perhaps even (gasp!) take time to evaluate some of the information available on the kinds of food Paleo promotes. The fact that Paleo is constantly compared to the Adkins diet shows that many simply don’t understand the fundamentals of a true ancestral diet. Paleo is not about eating all of the hot dogs, bologna and pork rinds that one desires, but rather focuses on quality (locally grown when possible) grass-fed and organically-raised meats, fish and eggs. I feel this is a key principle that many “experts” fail to grasp, as I constantly see those highly processed “meat” products placed into the same category as the grass-fed and organic varieties promoted on a Paleo lifestyle. These are completely different foods with drastically varying nutritional compositions and must be assessed as such.

Now for the fats- While the link between saturated fats and cardiovascular disease has been refuted a number of times now, apparently the “experts” claiming that the saturated fats consumed in the Paleo diet will “quickly ratchet up your risk for heart problems” (to quote US News and World Report) need to update the data that they are using to link Paleo to cardiovascular disease. Most recently, the Annals of Internal Medicine presented a study done by an international team led by the University of Cambridge’s Dr. Rajiv Chowdhury which collated and re-analyzed data from 72 separate studies involving over 600,000 participants. According to this report, after reviewing these 72 studies, no association could be found between total saturated fats and coronary disease risk.

For those claiming that the Paleo lifestyle is unmaintainable, I would agree that switching to a more primal way of eating does certainly require more time for meal planning and preparation. However, knowing that the Average American spends about 3 hours per day sitting in front of the television, it seems that with a proper time management, this Paleo business might be a more realistic. When it comes to the idea that the Paleo diet is too time consuming (and thus unmaintainable), it takes about the same amount of time to hit the produce and meat sections of the grocery store as it does those processed food-filled inner aisles and grilling up that chicken and vegetable dinner really doesn’t take much longer than prepare boxed dinner. As for being more expensive, yes- the food promoted on a Paleolithic diet tend to be more costly than those processed foods and other staples; however I can assure you the extra money spent on these high quality foods is a solid investment. Wouldn’t you rather spend your money on grass fed meats and organic vegetables than prescription pills and surgeries?

The bottom line is- I get it. There are tons of professionals graduating top Universities putting in their time and hard work obtaining their Master’s or Phd’s in fields of health and nutritional science programs based on Government recommendations and guidelines. I know all about this process because I was there; I studied nutrition in college, learned all about the food pyramid and was brainwashed into the whole “grains and low fat dairy for survival” myth that so many still believe in today. However, times are changing, research is changing and the health of our nation is changing. We’ve seen the low fat trend fail only leaving us fatter and sicker than ever. We’ve watched rates of heart disease, cancer and diabetes climb while autoimmune disease and obesity become more prevalent by the day. It’s time to begin thinking outside the box, to challenge our prior views on nutrition, and (if nothing else) to seriously look at the research and clinical application around an ancestral diet. While a strict Paleo diet may not be for everybody, the fundamentals of this lifestyle are exceptional. I’ve seen this lifestyle work too many times for too many people to even consider that this might not be one of the best diets around today. What else can I say, results speak louder than Reports.