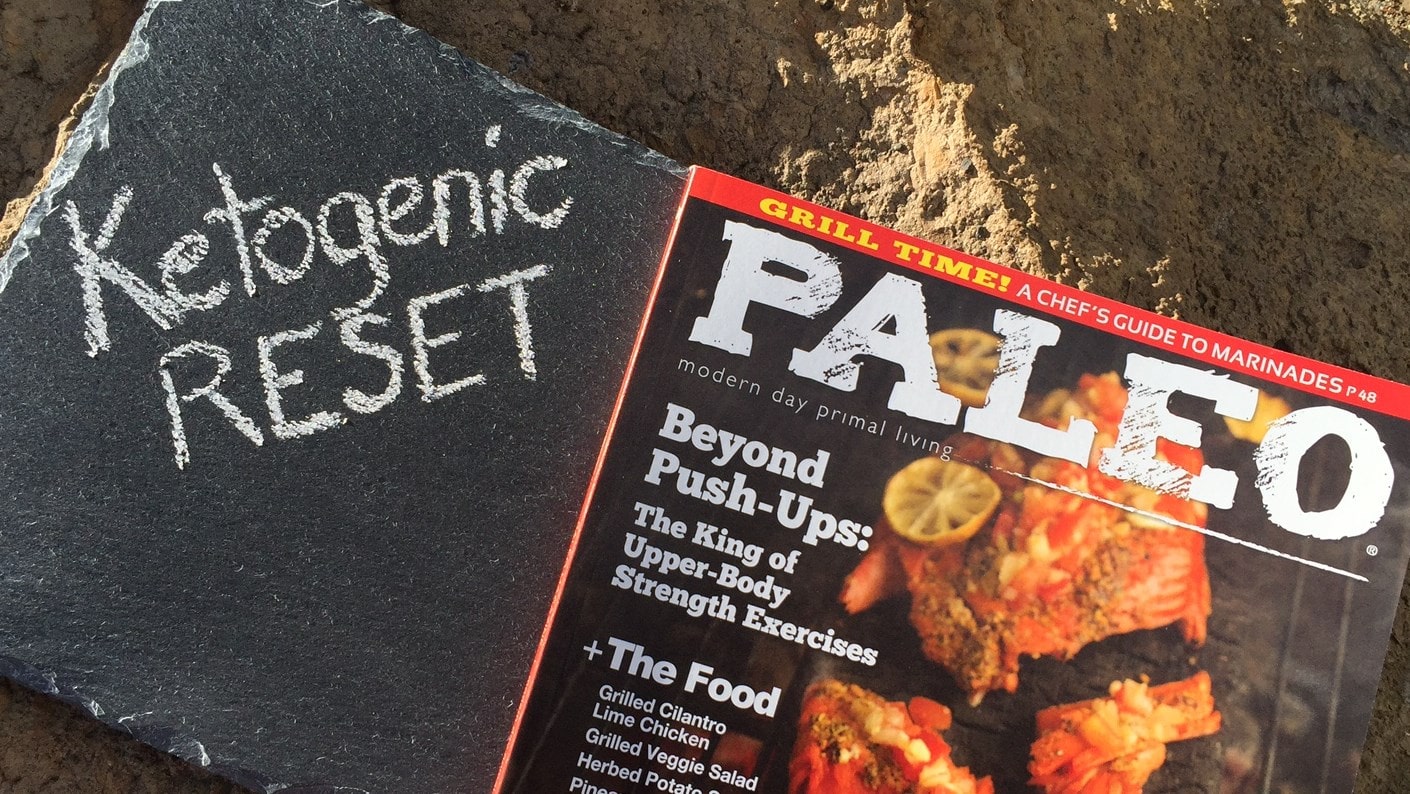 As a Functional Medicine Practitioner, I frequently attend advanced training modules hosted by the Institute of Functional Medicine. At the most recent module, on the subject of the immune system, I was provided information encompassing everything from the microbiome, inflammation, infections; to food and environmental allergens. Of course, being a Functional Medicine model, there was a great deal of content addressing prevention and dealing with the root cause of many of these common ailments. I was particularly intrigued by one of the presenters’ references to the ketogenic diet for a number of common ailments including neurological disorders, cancers and gastrointestinal dysfunction. While the Paleo diet tends to be among the most favored diets in the Functional Medicine arena, my interest was peaked as Dr. Thomas Sult explained that he often utilizes a short-term ketogenic diet prior to transitioning patients to a Paleo lifestyle. This is particularly beneficial for those still experiencing symptoms after trying numerous supplements, medications, or specialty different diets (including Paleo). According to Dr. Sult, the ketogenic diet can be an advantageous tool for those hoping to “reset” their system and has also been shown to:

Although similar to Paleo, a Ketogenic diet is different in that it involves more specific tracking of carbs, fats and proteins and (when followed precisely) involves regular monitoring of ketones to maintain a state of ketosis. While somewhat challenging to maintain, a recent year long study published by Annals of Internal Medicine and financed by the National Institutes of Health showed that when compared to a low fat/high carb diet, those on a ketogenic diet lost more bodyfat (and maintained more lean mass), and saw greater improvements in inflammatory markers, triglycerides and HDL cholesterol while lowering their risk of heart disease. (1)
To keep it very simple, ketogenisis is a process that occurs primarily in the mitochondrial matrix in the liver as a result of fasting or drastically reduced carbohydrate intake. The central nervous system is unable to use fat for an energy source and thus relies heavily on glucose. When carbohydrates are restricted, an alternative source of energy must be created. Thus the body produces acetoacetate, β-hydroxybutyric acid and acetone or ketone bodies to continue functioning. (2) Interestingly, relying on ketones for energy has proven to produce even more energy than glucose as a result of the metabolic effects of ketosis. (3)

Today’s ketogenic diet is different than the once popular Atkins diet in that it requires a fairly specific daily nutrient intake of about 30-50 grams of carbohydrate, 80-100 grams protein and the remaining of calories being consumed in the form of fats (preferably 20% grass-fed/organic saturated and 80% polyunsaturated and monounsaturated fats). Thus, this is not a green light to run out and eat all of the bun-less cheeseburgers and hot dogs you can enjoy, but rather (in some ways) a more calculated Paleolithic regimen. Those regularly enjoying grass fed meats, wild caught fish, organic poultry, eggs, coconut oil, avocado, nuts and seeds, greens and non-starchy veggies should find it to be a relatively easy transition to a ketogenic diet.

For those following a Paleo diet and getting results, my recommendation is to keep doing what you’re doing. A paleo diet is relatively easy to follow (especially after it becomes a lifestyle) and for most, those fruits, starchy vegetables and some tubers in moderation is a perfectly balanced plan. However, for those with more specific health concerns, a temporary ketogenic diet could be just what the doctor ordered (or should have ordered). Lets look at a few of these conditions:

If there were one population that I believe would benefit most from a ketogenic diet it is those with neurological disorders. As a proven treatment for drug resistant epilepsy (4), it is believed the ketogenic diet works by enhancing and normalizing energy metabolism and function of cells in the brain. We also know the ketogenic diet is effective in improving mitochondrial function and decreasing oxidative stress and inflammation. While studies are still being conducted, the primary benefits of a ketogenic diet certainly point to endless benefits for those suffering from neurological disorders ranging from Alzheimer’s and Parkinson Disease to depression and bi-polar disorder.

In addition to neurological function, some studies today also suggest the ketogenic diet could be extremely beneficial for certain forms of metastatic cancers (particularly brain, breast and colorectal). While debatable, the theory behind a ketogenic diet for treatment and prevention of some forms of cancer is based on the knowledge that cancer cells need glucose (sugar) to survive. While healthy cells are able to switch to fats for fuel when glucose is unavailable, cancer cells cannot. Recent evidence shows a direct link between high levels of plasma glucose and cancer risk and according to an article found in The Journal of Clinical Investigation as increased glucose uptake is linked to some forms of cancer. (5) Another series of studies conducted by keto expert Thomas Seyfried has shown that in animals with brain tumors, a calorie-restricted ketogenic diet decreased tumor growth rates. (6) Seyfried’s theory behind the ketogenic diet is based on the idea that “compensatory metabolic pathways are capable of modifying the pathogenesis of complex diseases. Global shifts in metabolic environment can neutralize molecular pathology…” in order to “target and kill tumor cells while enhancing physiological health of normal cells”. (7)

There’s been a growing awareness and prevalence of bacterial (SIBO or small intestinal bacterial overgrowth) and candida infections in the past few years. There are a number of specialty diets available today (including the low FODMAP, GAPs and SCD diets) for those dealing with SIBO, candida and other bacterial or yeast overgrowths, which I typically recommend prior to resorting to a ketogenic diet. However, for those who have tried these diets and other treatments with no success, a short-term (3-6 weeks) ketogenic diet can be beneficial for resetting the GI system.

While promising, the ketogenic diet does have its downfalls. It can be extremely limiting to remove all starchy carbohydrates, fruits and sugars and it can be difficult to obtain an array of antioxidants and vitamins when food choices are so restricted. As mentioned, the macronutrient composition needs to be monitored to ensure a state of ketosis is maintained, making this diet fairly difficult to maintain. As a result, I wouldn’t prescribe a ketogenic diet permanently except for in the case of a life threatening illness or some neurological disorders that was effectively managed with a ketogenic diet. And of course there are cases where people find that they feel significantly better and can easily maintain this way of eating and thus choose to continue to remain low carb.

While it may come as a surprise to many, much of modern medicine really is a guessing game as providers often have to speculate the origin and optimal   treatment for many of today’s common health conditions. With conventional medicine, this usually involves the prescription of a number of medications to determine which can effectively ‘manage’ the condition (or in most cases simply masks the symptoms).

While the jury is still out on whether the ketogenic diet really is the next miracle cure, for anybody with any of the above mentioned conditions, I certainly believe it could be worth experimenting with. At the very least this diet could help to drastically improve the lives of those with epilepsy and reset some of the body’s microbial imbalances.  And with a growing amount of evidence, it could stop the progression of Alzheimer’s disease or even some forms of cancer. Unlike many of today’s modern treatments, those who give the ketogenic diet a try really have nothing to lose but perhaps some bodyfat and a few weeks without those beloved carbohydrates.