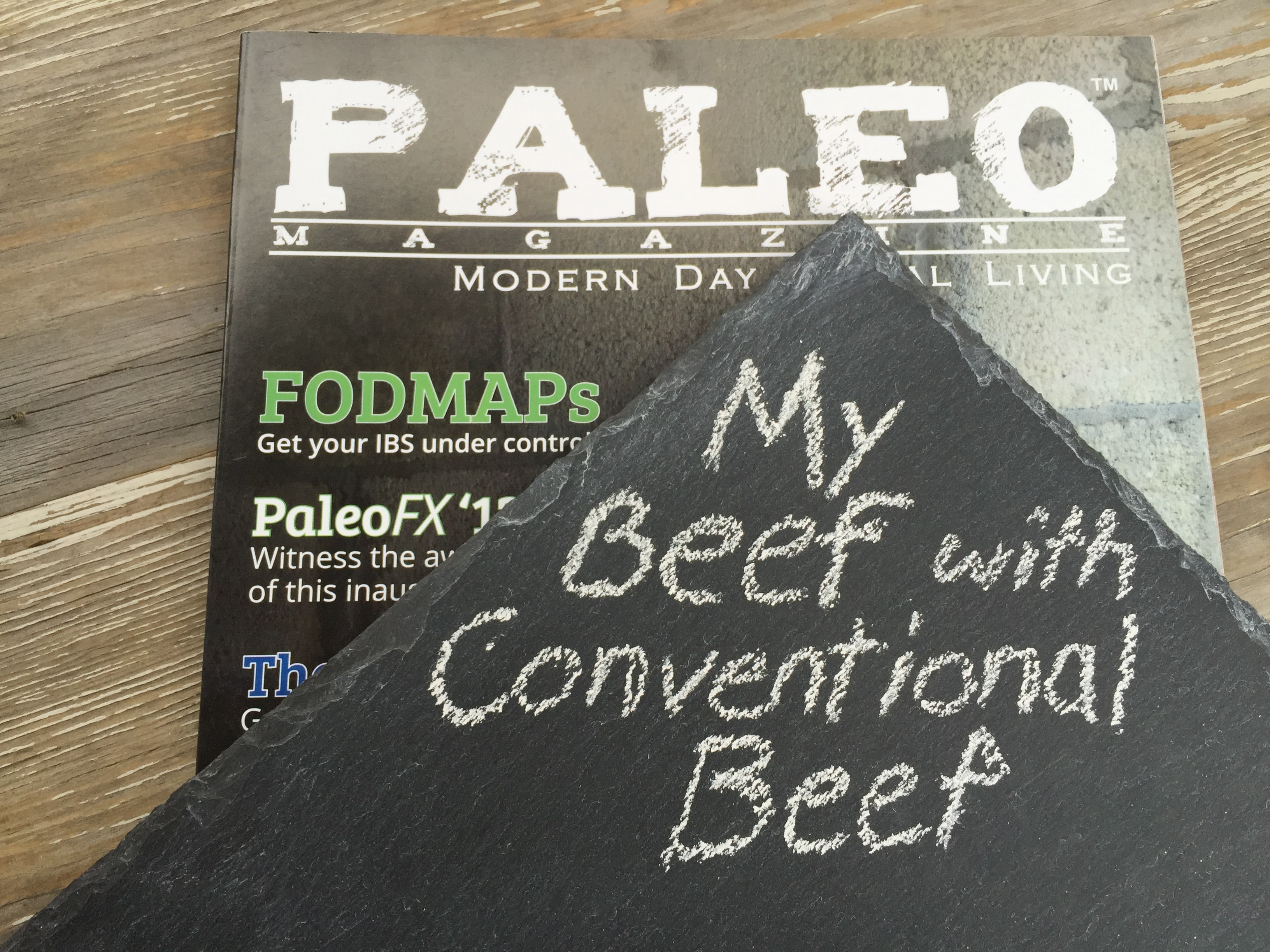 My Beef with Conventional Beef

As a Healthcare Practitioner, Natural Bodybuilder, and die hard advocate of the importance in diet when it comes to preventing and treating disease, I’d like to take a few moments to discuss my personal knowledge and opinion about America’s favorite meat: Beef.

When it comes to the world of beef, we must consider the drastically different circumstances grass fed and conventionally raised feed lot beef encounter prior to ending up on our plates, as these circumstances result in two very different cuts of meat. Conventionally raised beef are often loaded with antibiotics and hormones and fed a diet of pesticide covered genetically modified organisms all while living a life of very limited movement. Meanwhile, grass fed beef graze on a natural diet of grass (which by the way is what cows were meant to eat; not corn or soy or other grains) and able to move about freely; resulting in a meat similar to what our ancestors ate hundreds of years ago. As mentioned, these varying forms of raising cattle create two drastically different forms of meat, which ultimately have considerably different effects on one’s health.

The Issues with Feed Lot Beef:

Higher Cholesterol Levels
While I’m a firm believer in the benefits of animal proteins, I will never say you don’t have to worry about cholesterol. Elevated cholesterol levels are still, and have always been, a significant risk factor for heart disease and stroke. In some cases elevated cholesterol may show no signs of arterial plaque buildup, but that’s in an otherwise perfect environment consisting of normal to low blood pressure, reduced inflammatory markers, an anti-inflammatory diet high in antioxidants, low stress, good genetics, etc. As you may have guessed, conventionally raised beef contains significantly higher levels of cholesterol than grass-fed varieties.

Higher Saturated Fat
Beef raised just under 100 years ago had just one third the amount of saturated fat found in feedlot beef today. The grass-fed cow offers leaner cuts of meat, thus providing less saturated fat. I realize there are some who will argue that saturated fat may not be as bad as we once thought and I certainly respect those opinions. However, after personally viewing hundreds of studies linking saturated fats to heart disease, I’m not fully convinced. Until all studies conclusively deny a link between disease and saturated fats, I’ll continue to monitor my intake of this fat.

Omega-3 Fatty Acids
Meat that from organically raised cattle, has significantly more Omega-3 fatty acids than conventionally raised meat due to the dietary consumption of omega-rich grass. The anti-inflammatory properties of Omega-3 fatty acids have been shown to reduce the risk of a plethora of health problems, including diabetes, some cancers, allergies, depression, autoimmune disorders AND heart disease.

Conjugated Linoleic Acid
Levels of conjugated linoleic acid (CLA) are FIVE times higher in grass-fed beef compared to conventionally raised varieties. CLA has been shown to decrease tumor growth of some cancers by over 50%, while also lowering blood pressure, decreasing inflammation and reducing the risk for cardiovascular disease.

Vitamin E
Meat from pastured, grass fed cattle is four times higher in vitamin E than the meat from feedlot cattle and, interestingly, almost twice as high as the meat from the feedlot cattle that were actually given vitamin E supplements. In humans, vitamin E is linked with a lower risk of heart disease and cancer. This potent antioxidant may also have anti-aging properties. Most Americans are deficient in vitamin E.

Antibiotics
The over-crowded conditions found in Concentrated Animal Feed Operations (CAFOs) combined with an unnatural diet of genetically modified grains and significant levels of stress often result in weakened immune systems and sickness in these animals. As a result, antibiotics are given to all cattle in steady doses to prevent the contraction and spread of diseases among these unhealthy cows. Guess where those antibiotics end up after the cows are made into beef?

Hormones
Hormones are routinely administered to CAFO beef cattle to improve feeding efficiency, reduce behavioral problems, and enhance production. Concern over hormone use has grown considerably over the last decade as the hormones in beef have been linked to the early onset of puberty and breast cancer. Not to mention a wide range of endogenous hormones are detected in runoff and feedlot surface soils and manure from cattle given synthetic steroids. The level of hormones from runoff alone within CAFOs is of environmental and public health concern.

There is a reason consumer reports are now urging consumers to buy organic meat, even if it is the only organic option you can afford to put in your shopping cart. Ultimately, you will end up paying a little more for your grass fed meats; however I can assure you paying a little more now is always better than paying for a quadruple bypass surgery down the road.